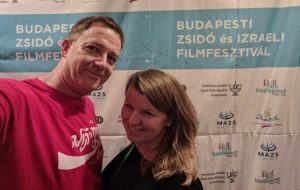 The opening night of the 8th Budapest Jewish and Israeli Film Festival was a lot of fun Wednesday, November 27, 2019, at the Puskin theater. The Budapest Jewish community is small enough that an event like this once can met close and distant friends. It was great to see people I haven’t in years. We probably wouldn’t have if we had not had coffee with a friend a few days earlier. She, Eszter Kárász, is a singer and an actress, who mentioned that she was hired to sing during the opening party of the festival. That’s how we learned that there would be a party. Therefor we want way earlier than the show was supposed to start and could enjoy not just her French chansons, but also Russian champagne, six-pointed star shaped cookies and  #8 shaped pretzels. (It took a moment to realize that the apropos for this unusual shape is that this was the 8th iteration of the festival.)

Beyond our friends we saw 4-5 rabbis, several university professors, a number of directors of various institutions and probably other dignitaries who didn’t recognize. Once everybody who wanted to be seen was seen and took the semi- obligatory photos in front of the poster with the festival’s name and sponsors on it we all headed in to the auditorium. There the two main organizers introduced (and teased) each other stand-up style dripping some humor into the opening. After the funny intro and the necessary greetings and thankyous they read a few words about how films and movies in general to set the tone for the evening and the festival. Then it was time for the movie:  “La promesse de l’aube” aka “Promise at Dawn“, which we enjoyed quote a bit. My wife’s mother tongue is Polish so it was a welcome surprise for her that in the first third of the movie plenty of Polish was spoken. It was a thought provokgi movie about parenting, motivations, devotion, talent, heroism with a surprise twist at the end.

I captured a few moments of Eszter’s singing, a few words of the intro and the monologue and hopefully the atmosphere of the whole evening in the video below.