Every nation has its heroes. Some adore athletes, others soldiers, or actors, or rich people or politicians, or clergyman. OK, it is a generalization at least in two ways, because not everyone in a given nation will adore the same kind of people and you can have more than one type of heroes, but you get the point. One of the things I learned from this film how the stars of Israel got to include poets. From the very beginning of the nation’s births there were poets among the influential leaders of the country as it was being born, chief among them Nathan Alterman. (For proof of him being an idol for Israel just check the 200 shekel bill.) He had a powerful presence, although he never was an elected politician. Bird in a Room is a poetic biopic about his daughter, Tirza Atar, but having such a famous father cannot be omitted, so it is quite about him too. 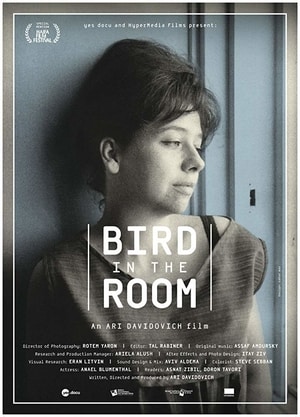 I will not recount the details of Tirza Atar’s life and death, for that you really have to watch this documentary. In short though, she grew up in the shadow of her famous and loving, but not always present father and struggled to find her own poetic voice, eventually succeeding in this endeavor. She worked as an actor, even went to acting school with her first husband to New York (end ended up studying dancing under Martha Graham), but missed her beloved homeland too much and returned to Israel. She wrote lyrics to songs too, e.g. this Chava Alberstein Birthday Prayer, and once her children became toddlers started writing down the stories she told to her children as children books. The most famous of these became The Lion That Loved Strawberries.

Not being an Israeli, nor fluent in Hebrew, I had limited exposure to Israeli poetry as most of it was never really translated to English. Thus through this movie  I enjoyed learning about these poets, their milieu and of course hearing at least some of the poems they wrote. I checked amazon.com and didn’t find any book or collection by either the father or the daughter. This lack of access to the poems themselves (in English) raised the question about the target audience for the movie. I assume it primarily works Israelis who are probably aware of the heroine to varying levels of degree, depending on how well-versed and interested they are in literature they are. Just like documentaries about baseball players in the US are popular among baseball fans, this gives details and background story of heroes of Israel for them. For outsiders like me it provides a small peak inside though.

I couldn’t decide whether the filmmakers were nostalgic, or educational or factual when they tried to install a sense that “back then”, when Nathan Alterman was in his prime everyone had role in society. When his daughter became of age this sense of place and duty started to get disappear ad by the time of her death it stopped existing altogether. They also left the question unanswered whether she committed suicide or died in an accident. My overall impression is that this ambiguity itself is (part of) the answer in modern times.

Bird and freedom are the recurring themes in the movie. Tirza craved freedom, like birds; albeit she spent her life in rooms, according to the title. It fits then that her demise was falling/jumping out of a window. The technique that is often used at the end of films, when the camera keeps getting higher and we are getting an ever more distant view and less and less details of the scene at hand is sometimes called “God’s eye’s view”. It helps to evoke the feeling in the viewers that on one hand we are gaining a wider perspective and on the other hand there is always a bigger picture to get. Now, that drones make this technique cheaper and more available to the everyday and even lay filmmaker I am wondering whether its (over)use helps the depersonalization of society. Nowadays the barrier to fly above is so low, that anyone can tear him/herself out of society, therefore weakening its fabric.

Back to the film: it is extremely well edited: building up a good rhythm with the use of archival footage, atmosphere establishing shots, recitals of poems and songs and of course the inevitable talking heads. When I sat down to watch it I had to fight the urge or not doing so as I had little interests in the topic and never heard of the people in it. However the film drew me in and ended up being one of the most exciting documentary I ever watched. Thank you, Ari Davidovich–writer, director, producer of the movie–for teaching me in a way I enjoyed it.

* I had a chance to watch this movie because Docs for Edcuation provided me with a copy. Thank you.