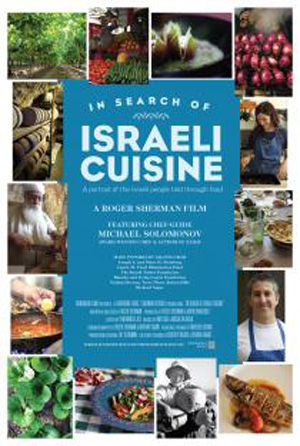 Take one part of each: travelogue, anthropology, cooking show, business study, biography, add a whole lotta color and spice and you just created the movie In Search of Israeli Cuisine. You also need some cash, so you ran a successful Kickstarter campaign and then turned it into a PBS movie and you are still accepting donations through the Jewish Journal. If you did all this your name is Roger Sherman, the director, writer and Michael Solomonov, the chef/guide of the film.

Let’s look at the ingredients. We are taken to all corners of Israel and as can be seen on the intercut map it happens in a non-linear way. We don’t see much more of the country than the selected restaurants or homes of restaurateurs, but even this limited view ensures that we become aware the geographical and visual diversity of the country. It is also an ethnographic study. If you want to define and identify the cuisine of such a country, that consists of or comes from scores of ethnicities you kind of have to dig into their stories. It is done through participatory observations as we get into people’s identities through their home and commercial kitchen.

Not a single recipe presented in its full detail in the movie, but it is still very much a cooking show. We learn lots of details, tricks, secrets on how certain items are created, but only based on the information gained here you wouldn’t be able to cook any of them. Mr. Sherman is a restaurateur himself, so he was interested in the business aspect of “Israeli cuisine”. We hear about trends in the changes of Israeli taste, the importance of location, and how the industry has changed over the decades. We also learn about Solomonov himself, his background, his brother’s death and what made him search for his identity.

None of these academic details matter though as much as the fantastic, foods, places and people he discovered for us, the wider audience. From simple whole-in-the-wall places to posh over-the top eating palaces almost everyone emphasized the importance of using local, wholesome ingredients. And they sure looked succulent. Some may find the movie bit long. It isn’t exactly repetitive, but a bit of editing would have improved the cinematic experience. I, though, enjoyed every minute of it. My only regret is that I couldn’t taste it. I wish someone would invent an extension where you could taste what’s cooking on the screen. This film would be the first one I would try that out with.

* As a member of the committee helping to put on the Jewish Film Festival, organized by the Jewish Community Center, Sonoma County, I preview movies to help decide which ones to play at the Festival. I watched this movie as part of this volunteer effort.